Everything You Need to Know About Reward Charts (+ PDF Templates) 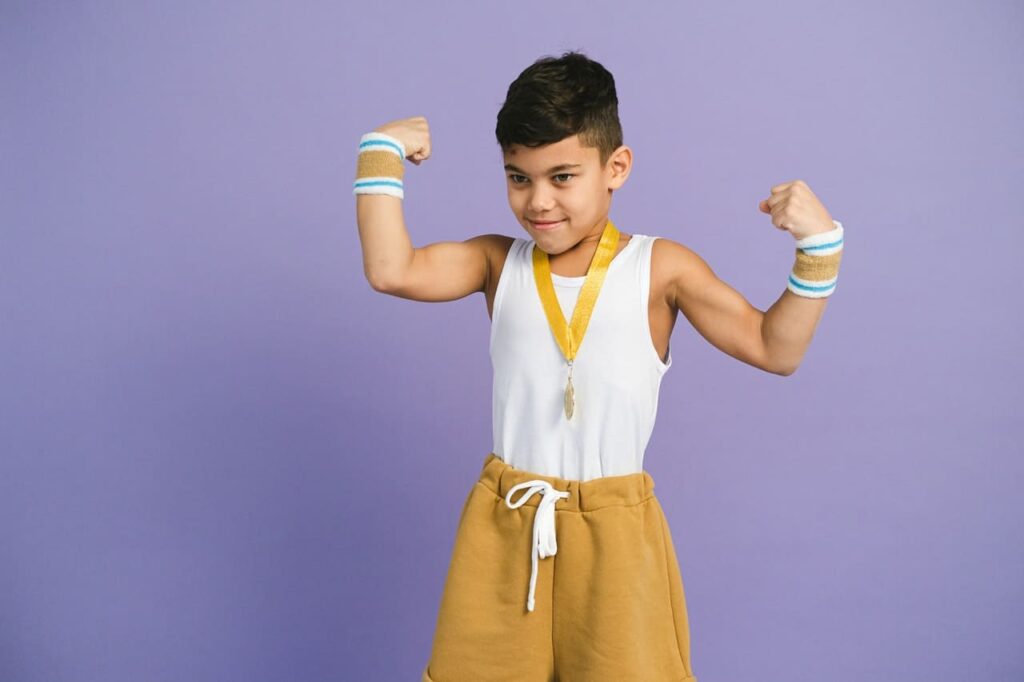 Behavioral problems that children have are a source of trouble for many parents. If begging and pleading doesn’t work, parents often resort to yelling at kids. Still, if it makes them calm down for a little while, there is no guarantee that problems disappear in the long run. On the contrary, yelling increases the level of misbehavior. A reward chart for kids is one of the options that help parents maintain discipline. So today, let’s talk about it.

Reward Chart as a Tool for Boosting Good Behavior

The designs of a template are different. Besides, since there are no unified rules, parents are the ones to impose them. There are many ways of using it.

How Does a Reward Chart Work? (On Example)

Tom is 7. He`s a good boy but usually fails to get to school on time. Tom forgets to wash his hands from time to time, and he never makes up his bed. His mom decided to set up a behavior reward system. She looked through the behavior management printable reward charts and decided on one of them. From that moment on, she stopped criticizing her son’s bad behavior. Tom`s mom began focusing on the positive moments instead.

There were points for making a bed, brushing teeth, getting to school on time, washing hands, and so on. She weekly wrote down on a board the number of points received. Three points stood for 15 cents. Tom was free to spend them on his own decision. As a result, his behavior became better. Tom learned new positive habits because he had a motivation for it. By the way, it’s not so easy to motivate children, but the chart works miracles.

The most powerful motivation is intrinsic. Reward charts for kids are, in turn, a source of extrinsic motivation. Still, researchers claim both types of inspiration are connected. Thus, one should have basic skills for learning the intrinsic value of an activity. They are taught with the help of extrinsic motivation tools. Take, for example, reading. A kid may find it exciting and, thus, be intrinsically driven. Yet, there was extrinsic motivation at first, when he received points for reading 10 minutes a day. By the way, kids may complete a survey to find a book they will certainly like. 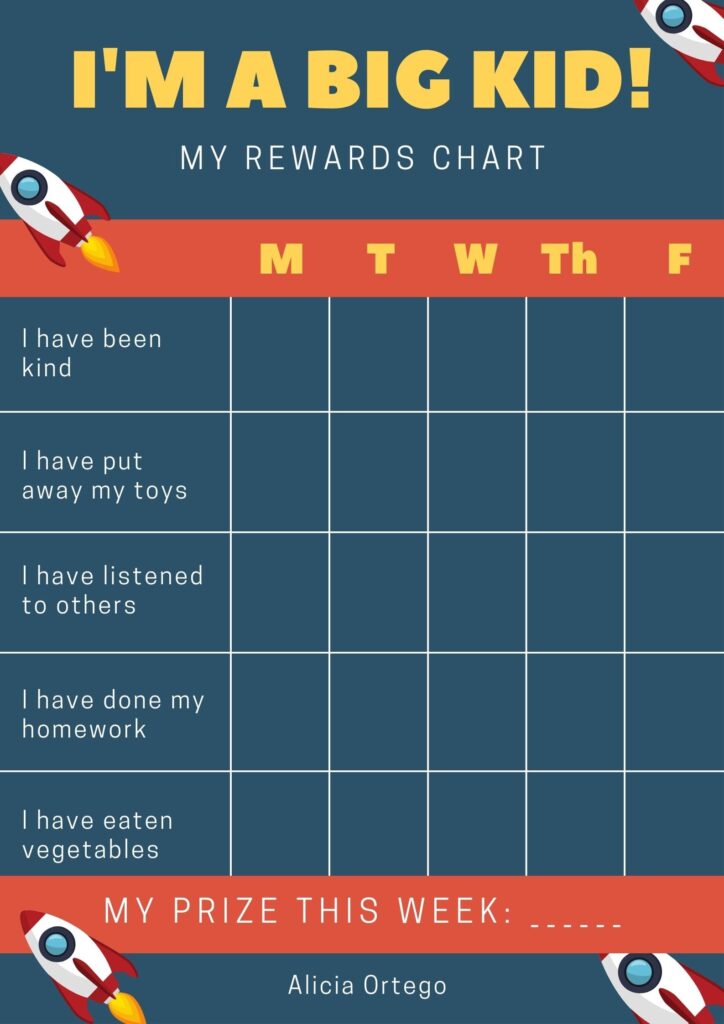 What Types of Reward Charts for Kids to Choose?

A sticker reward chart is an option for small children up to 6 years of age who focus more on receiving praise. It’s one of reward charts that can be printed or done by parents themselves. Write down the chores or actions your child should do. Put stickers right after the kid has succeeded. Come up with a reward for a certain amount of stickers.

You may find stickers on the internet or create your own one. It can be small squares or disks with cartoon characters. Another option is stickers in the shape of random characters. The only thing that matters is that kids like its design. 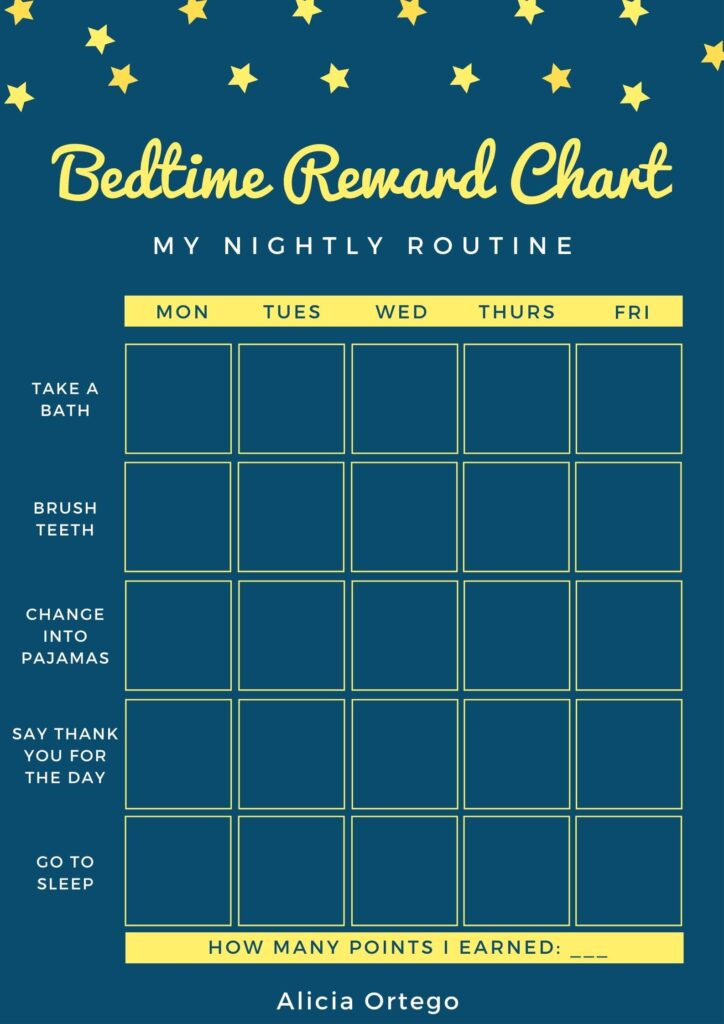 It’s one more DIY idea. Create a colorful scale where each color stands for a certain type of behavior. For example, on the red one, there is an inscription “Parents’ choice”. “Chew on it” is an orange one. “Ready to consider parents’ decision” is green, “Great job” is blue and “Outstanding” is yellow. Use a clothespin to point at the color you need. A kid starts his day on a green one. Move the pin up and down to evaluate his behavior. Praise a child when it’s on the yellow one. Decide on the prize he will receive for it. The chart is a good option for preschoolers and toddlers.

This chart has space for noting points received during a week. There’re various types of designs. It’s up to you to decide which to choose. Besides, instead of stickers or numbers, you can put on a star that is equal to one point. Apply such a reward system for kids older than 5 years. Toddlers and preschoolers may fail to keep in mind how many points they need to reach a goal.

Kids can make up their own charts and mark certain achievements. There is a great example of a kid reaching his goal one step at a time in my book Confidence is My Superpower.

The tasks and chores can be different. Make a list of them. It can be getting up early, reading a book, doing morning exercises, walking a dog, etc.

Setting Up a Reward Chart

Be consistent in setting up a reward system for kids. If you give up this idea after a few days, you bring to naught the importance of fostering good habits. Thus, it needs discipline from parents as well. Here’s a step-by-step guide.

Everything You Need to Know About the Behavior Reward System

Researchers claim there`re many disadvantages of kids’ behaviour charts. According to them, kids are getting used to receiving awards for every deed they do. Plus, they become dependent on the fact, they are always evaluated even if it’s not so. Indeed, it can contribute to promoting neurotic disorders. Yet, it all depends on the way you use a reward chart. Many things in our life can be both useful and harmful depending on the manner it’s applied. Here are some tips:

Trying different solutions to the problem is better than ignoring it. In case your kids have challenging behavior, use our charts to fix it. Love your children no matter how disobedient they are, and things will straighten out.